KANCHANABURI: A total of 33 Myanmar job seekers were caught illegally crossing the border into Muang and Sai Yok districts of this western border province on Tuesday, police said. 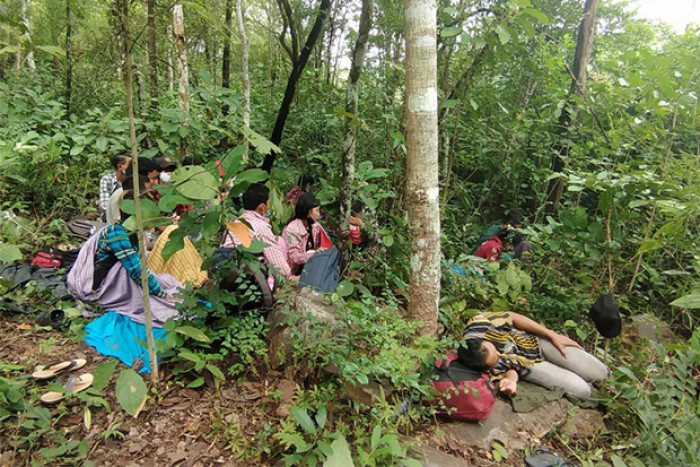 Illegal migrants caught hiding in a forest waiting for transport to jobs further south, after they crossed the border from Myanmar to Kanchanaburi on Tuesday. (Photo: Piyarat Chongchareon)

KANCHANABURI: A total of 33 Myanmar job seekers were caught illegally crossing the border into Muang and Sai Yok districts of this western border province on Tuesday, police said.

The first group of five men was arrested about 7am by soldier of the Lat Ya Task Force while hiding in forest near Huay Nam Khao village in tambon Ban Kao, Muang district.

The Myanmar guide who led them across the border ran away on seeing the patrol.


Two of the illegal border crossers were from Bago and three from Yangon. They said they had each paid 25,000 baht to Myanmar brokers for jobs in Bangkok.


Another group of 28 job seekers, 13 men and 15 women, were rounded up by a combined military and police patrol in forest near Phu Phya village in tambon Si Mongkhon, Sai Yok district, on Tuesday afternoon.


They were from Bago, Yangon and two other townships in Myanmar - with 18 heading for work in Samut Sakhon, five for Samut Prakan and five for Ratchaburi's Ban Pong district. They were to pay 17,000-18,000 baht each to job brokers on arriving at their destination.


They were handed over to Muang and Sai Yok police for legal proceedings and then deportation.

Banks to refund victims of scam

Only one new Covid-19 case in Thailand; govt reduce curfew...

Thailand may hold a July Songkran event if Covid-19 situation...