Graduates of Chulalongkorn University have come out to support the Phra Kieo parade after the student union decided to drop it from the annual football match with rival Thammasat University. 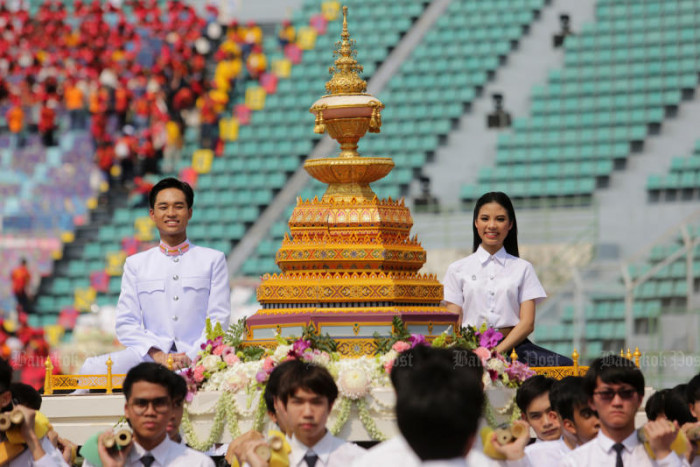 Chulalongkorn University students carry the Phra Kieo on a sedan chair to Supachalasai Stadium ahead of the last clash with rivals Thammasat University, on Feb 9, 2019. (Photo: Wichan Charoenkiatpakul)

Graduates of Chulalongkorn University have come out to support the Phra Kieo parade after the student union decided to drop it from the annual football match with rival Thammasat University.

The match is traditionally in January or February, but this year's clash was cancelled because of the Covid-19 pandemic and the next match has already been put off.

The Alumni Association of Chulalongkorn University issued a statement on Monday making clear its intention to keep the parading of the university's symbol a part of the activities preceding the match.

The Phra Kieo was a symbol held proud by former and present students of the university  and the parade was a show of gratitude and appreciation of the unversity's founders, the statement said.

The announcement was in direct opposition to the decision made public on Saturday by the CU student union to cancel the Phra Kieo parade , describing it as representing  authoritariansm and inequality.

Phra Kieo is the emblem of CU. The university was founded by King Chulalongkorn and the present name was given by King Vajiravudh.

Parading the Phra Kieo to the football stadium is part of the activities prior to the kick-off at the highly competitive annual match.

The decision to drop it ignited a fierce debate between supporters of the student administrative body and its opponents.

The annual football match is alternately hosted by the alumni associations of the two universities and the Phra Kieo is traditionally carried by present-day CU students.

The Chulanglongkorn-Thammasat football event has been held for 75 years. The host TU alumni announced last month that next year's year's game would be put off due to the Covid-19 pandemic.

The match this year was also cancelled.

The CU student union posted a Facebook message saying they were surveying the opinions of students and staff at the university and the general public about the move to end the parade, and about other changes that were needed.

Thousands of Thai workers to return to Taiwan